Shaun Ross is an American model, recording artist, and actor. He is known for his work in the fashion world as the first professional male model with the congenital disorder albinism. Ross has worked with various fashion designers, magazines and campaigns, including Givenchy, Alexander McQueen, Vogue, GQ, Nylon and others. In 2018, he collaborated with designer Nina Athanasiou for the "In My Skin" clothing line to bring awareness to albinism. He has also appeared in several videos from music artists, including Beyoncé's "Pretty Hurts", Lana Del Rey's short film Tropico, and Katy Perry's "E.T".

First albino model to work for such high-end fashion designers as Alexander McQueen and Givenchy. Originally a dancer, he trained for several years at the Alvin Ailey School.

He was born to an African-American family in The Bronx, New York. His parents are Geraldine and Shaun Ross, he also has three siblings.

His albinism made him the object of much bullying. He appeared on the Tyra Banks Show in 2009 and discussed his negative childhood experiences.

He appeared in the music video for Katy Perry's song "E.T."

Shaun Ross's house and car and luxury brand in 2021 is being updated as soon as possible by in4fp.com, You can also click edit to let us know about this information. 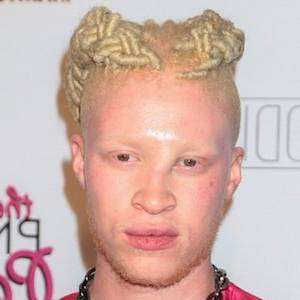