Patrick Andrew McCaw (born October 25, 1995) is an American professional basketball player for the Delaware Blue Coats of the NBA G League. He played college basketball for the UNLV Runnin' Rebels and earned second-team all-conference honors in the Mountain West Conference (MWC) as a sophomore in 2016. McCaw was selected by the Milwaukee Bucks in the second round of the 2016 NBA draft. He won three NBA championships in his first three seasons: two with the Golden State Warriors and one with the Toronto Raptors.

The Milwaukee Bucks selected him in the second round of the 2016 NBA draft, but he was traded to the Golden State Warriors on draft night. In 2017 and 2018, he won NBA Championships with the Warriors.

He and his five siblings are the children of Jeffery and Teresa McCaw.

After transferring from Christian Brothers College High School, he helped Montrose Christian School win the National Christian School Athletic Association Division I title in his senior and only season with the school.

During his college days at UNLV, he was named Second-team All-Mountain West in 2016. He was also named to the Mountain West All-Defensive Team that same year.

He would replace Klay Thompson and Kevin Durant in the starting line-up for the Warriors when either of them rested or were injured during the 2016-2017 season.

Patrick McCaw's house and car and luxury brand in 2021 is being updated as soon as possible by in4fp.com, You can also click edit to let us know about this information. 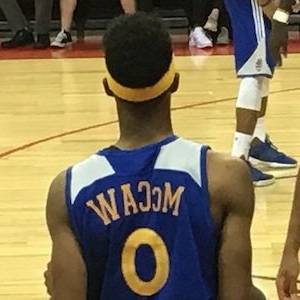