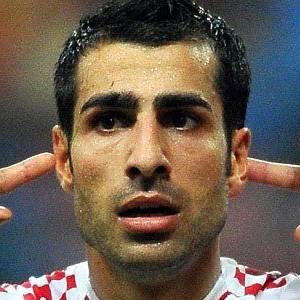 Mohammed Ghaddar was born on January 1, 1984 (age 37) in Lebanon. He is a celebrity soccer player.

Lebanese soccer player who won five Lebanese Premier League titles with Nejmeh from 2000 to 2009. After transferring to Kelantan FA, he won the Malaysia Super League, Malaysia FA Cup and Malaysia Cup titles in 2012.

He took a week off to visit his seriously ill father in Lebanon in 2012.

In 2007, He was presented with the award for being the top scorer in the AFC Cup by Lebanese national team coach Emile Rustom at a ceremony in Beirut.

Information about Mohammed Ghaddar’s net worth in 2021 is being updated as soon as possible by infofamouspeople.com, You can also click edit to tell us what the Net Worth of the Mohammed Ghaddar is

He and Indra Sahdan Daud have both led the AFC Cup in scoring.

Mohammed Ghaddar's house and car and luxury brand in 2021 is being updated as soon as possible by in4fp.com, You can also click edit to let us know about this information.