Marudhur Gopalan Ramchandran, better known by his initials MGR, was an Indian actor who later became a well-known politician. He was the first well-known Indian actor to be elected Chief Minister of a state in India. MGR's career began in the film industry. He enrolled in a theatrical group since he had a strong desire to act. In 1936, he won a role in the Elle Dungan film "Sathi Leelavathi." There has been no going back for this exceptional actor since then, who has only improved and refined his acting talents over time. MGR knew Annadurai, one of the most famous leaders of the Dravidian movement, throughout his film career. MGR saw Annadurai as his mentor as a result of the latter's influence. It was because of his friendship with Annadurai that MGR was able to enter politics. He joined Annadurai's Dravidian political party, the DMK. After Annadurai's death, Karunanidhi took over as leader of the DMK. As a result, MGR founded the ADMK, his own political party. From 1977 through 1984, the ADMK, which later became the AIADMK, dominated Tamil Nadu, with MGR as its Chief Minister. His programs were aimed at promoting social welfare and economic development. He instituted a number of educational reforms, enhanced the free meal program, outlawed booze, and maintained the state's cultural history, all of which helped to attract tourists.

In the 1936 film Sathi Leelavathi, he made his screen debut. He joined the Indian National Congress Party around this period, and eventually created his own political party, the Anna Dravida Munnetra Kazhagam.

In 1967, he was non-fatally shot by his long-time colleague, fellow actor and politician M.R. Radha.

Information about His net worth in 2021 is being updated as soon as possible by infofamouspeople.com, You can also click edit to tell us what the Net Worth of the MG Ramachandran is

He and fellow politician Jayalalithaa both held the office of Chief Minister of Tamil Nadu. 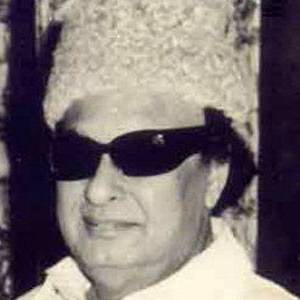