Joan Alexandra Molinsky , known professionally as Joan Rivers, was an American comedian, actress, producer, writer and television host. She was noted for her blunt, often controversial comedic persona—heavily self-deprecating and acerbic, especially towards celebrities and politicians. She is considered a pioneer of women in comedy by many critics.

Joan Alexandra Molinsky (Joan Rivers) was an American actress, comedian, writer, producer, playwright, screenwriter, film director, columnist, speaker, radio broadcaster, jewelry designer, and television personality. She worked in a variety of occupations as a child before deciding to pursue acting. She began stand-up comedy after acting in a number of short productions. After appearing as a guest on her mentor Johnny Carson's 'The Tonight Show,' she became a household name in the United States. She went on to make guest appearances on several talk shows and produce chart-topping comedy albums as a result of her newfound fame. In 1986, she became the first woman to host 'The Late Show with Joan Rivers,' a late-night network television show. The show's schedule coincided with Carson's, causing her old mentor to become enraged and never speak to her again. She usually performed hilarious interviews of celebrities strolling the red carpet at award events in the later years of her career. Her comedy approach remained controversial throughout her career, as she frequently used caustic and acerbic language to mock herself and other celebrities. She also penned 12 best-selling memoirs and comedies.

She worked as a tour guide, writer, proofreader, and fashionista, among other things.

An animated version of her appeared in Shrek 2, though her voice was redubbed by Kate Thorton.

She appeared as a frequent guest on Howard Stern 's radio show. 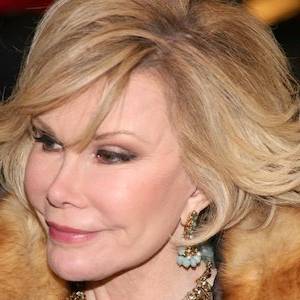