Eva Jacqueline Longoria Bastón is an American actress and producer. After a number of guest roles on several television series, she was recognized for her portrayal of Isabella Braña on the CBS daytime soap opera The Young and the Restless, on which she starred from 2001 to 2003. She is most known for her role as Gabrielle Solis on the ABC television series Desperate Housewives, which ran from 2004 to 2012, and for which she received Golden Globe and Screen Actors Guild Award nominations. She has also appeared in The Sentinel , Over Her Dead Body , For Greater Glory , Frontera , Lowriders , and Overboard . From 2015 to 2016, she starred as Ana Sofia Calderón on the short-lived NBC sitcom Telenovela, and was an executive producer for the Lifetime television series Devious Maids. She has also been an executive producer of social issue documentaries, including Food Chains and The Harvest.

Eva Longoria was born in the Texas city of Corpus Christi. She completed her Bachelor's degree in Kinesiology and then entered a talent competition, which helped her break into the entertainment industry. She made her acting debut on The Bold and the Beautiful, and then went on to play Isabella in the popular TV drama The Young and the Restless. She was nominated for a Golden Globe Award for her outstanding performance as Gabrielle Solis in Desperate Housewives, another popular television drama. Longoria, who grew up on a ranch in Texas, has been rated one of the most attractive individuals by a number of reputable publications, including People. She has also supported well-known businesses including L'Oreal and Hanes. She has been involved in a variety of philanthropic initiatives as well as supporting a number of humanitarian causes. She's also the author of Eva's Kitchen: Cooking with Love for Family and Friends and has participated in a Lay's potato chip promotion. Though this lovely actor's career did not start off as a huge success, it soon took off, and she is now one of Hollywood's hottest stars.

In 1998, she was crowned Miss Corpus Christi while still in college. She later appeared in an episode of Beverly Hills, 90210 and in a General Hospital episode.

She won the ALMA Award for Person of the Year in 2006. She opened a restaurant called Beso in Hollywood with Todd English in 2008. She executive produced and directed the show Devious Maids.

Eva Longoria's estimated Net Worth, Salary, Income, Cars, Lifestyles & many more details have been updated below. Let's check, How Rich is She in 2021-2022? According to Forbes, Wikipedia, IMDB, and other reputable online sources, Eva Longoria has an estimated net worth of $80 Million at the age of 47 years old in year 2022. She has earned most of her wealth from her thriving career as a Model, Actor, Film Producer, Voice Actor, Television producer, Businessperson, Dancer, Philanthropist, Film director from United States. It is possible that She makes money from other undiscovered sources

In 2006, she starred alongside Michael Douglas in the crime thriller The Sentinel.

Eva Longoria's house and car and luxury brand in 2021 is being updated as soon as possible by in4fp.com, You can also click edit to let us know about this information. 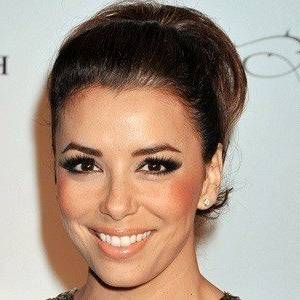