Arianna Stassinopoulos Huffington is a Greek-American author, syndicated columnist and businesswoman. She is a co-founder of The Huffington Post, the founder and CEO of Thrive Global, and the author of fifteen books. She has been named to Time magazine's list of the world's 100 most influential people and the Forbes Most Powerful Women list.Huffington serves on numerous boards, including Onex, and Global Citizen. Her last two books, Thrive: The Third Metric to Redefining Success and Creating a Life of Well-Being, Wisdom, and Wonder and The Sleep Revolution: Transforming Your Life, One Night at a Time, both became instant international bestsellers.Huffington, the former wife of Republican congressman Michael Huffington, co-founded The Huffington Post, which is now owned by BuzzFeed. She was a popular conservative commentator in the mid-1990s, after which, in the late-1990s, she offered liberal points of view in public, while remaining involved in business endeavors. In 2003, she ran as an independent candidate for governor in the California recall election and lost. In 2009, Huffington was No. 12 in Forbes first-ever list of the Most Influential Women In Media. She has also moved up to No. 42 in The Guardian's Top 100 in Media List. As of 2014, she is listed by Forbes as the 52nd Most Powerful Woman in the World.In 2011, AOL acquired The Huffington Post for US$315 million, and made Huffington the president and editor-in-chief of The Huffington Post Media Group, which included The Huffington Post and then-existing AOL properties including AOL Music, Engadget, Patch Media, and StyleList.On August 11, 2016, it was announced that she would step down from her role at The Huffington Post to focus on a new startup, Thrive Global, centered on health and wellness information.

Arianna Huffington is an author, philanthropist, television personality and owner of the independently liberal online news magazine, ˜The Huffington Post'. Originally from Greece, she moved to England when she was 16 and graduated from Cambridge University with an MA in Economics. At 21, she became president of the famed debating society, ˜The Cambridge Union' and was the first foreign born student to do so. After graduation, she made her mark as a conservative syndicated columnist and with the launch of ˜The Huffington Post' few years later, she created an online voice portal which offered critical observations on the political scenario. Her celebrity status helped her in getting several high-profile contributors to post their views on politics, news and culture. Arianna rose to fame in 2003 after she decided to contest as an independent candidate in the California recall election to replace then Governor Davis. Apart from this, she also led a Detroit project to promote fuel efficient cars. In 2009, she was named by Forbes as ˜The most influential women in media'; gaining 12th position in the list and in the same year Guardian included her in the top 100 media list. In 2011, AOL Inc. acquired ˜The Huffington Post' and made her president of that media group which included many then-existing AOL properties too such as ˜Engadget', ˜AOL music', ˜Style list' and ˜Patch Media'.

She married Michael Huffington in 1985 and supported him during his political career as a Republican congressman. She has two daughters, Isabella and Christina.

She was a beloved conservative commentator during the mid-1990s. However, she reverted to her more liberal views as the decade wore on.

Her company was purchased by AOL for $315 million. She was listed by Forbes as the 12th Most Influential Woman in Media in 2009.

Arianna Huffington's estimated Net Worth, Salary, Income, Cars, Lifestyles & many more details have been updated below. Let's check, How Rich is She in 2021-2022? According to Forbes, Wikipedia, IMDB, and other reputable online sources, Arianna Huffington has an estimated net worth of $100 Million at the age of 71 years old in year 2022. She has earned most of her wealth from her thriving career as a Politician, Commentator, Actor, Author, Journalist, Editor, Writer, Screenwriter from Greece. It is possible that She makes money from other undiscovered sources

She and Mark Zuckerberg, of Facebook fame, learned how to take advantage of social networking and incorporate it into the building of their respective empires.

Arianna Huffington's house and car and luxury brand in 2021 is being updated as soon as possible by in4fp.com, You can also click edit to let us know about this information. 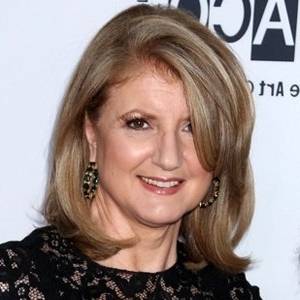