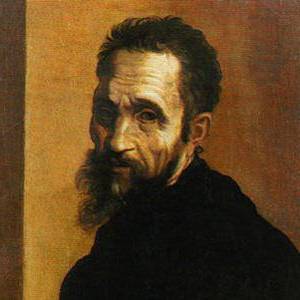 Michelangelo di Lodovico Buonarroti Simoni , known simply as Michelangelo , was an Italian sculptor, painter, architect and poet of the High Renaissance. Born in the Republic of Florence, his work had a major influence on the development of Western art, particularly in relation to the Renaissance notions of humanism and naturalism. He is often considered a contender for the title of the archetypal Renaissance man, along with his rival and elder contemporary, Leonardo da Vinci. Given the sheer volume of surviving correspondence, sketches, and reminiscences, Michelangelo is one of the best-documented artists of the 16th century and several scholars have described Michelangelo as the most accomplished artist of his era.He sculpted two of his best-known works, the Pietà and David, before the age of thirty. Despite holding a low opinion of painting, he also created two of the most influential frescoes in the history of Western art: the scenes from Genesis on the ceiling of the Sistine Chapel in Rome, and The Last Judgment on its altar wall. His design of the Laurentian Library pioneered Mannerist architecture. At the age of 71, he succeeded Antonio da Sangallo the Younger as the architect of St. Peter's Basilica. He transformed the plan so that the western end was finished to his design, as was the dome, with some modification, after his death.

Michelangelo, or Michelangelo di Lodovico Buonarroti Simoni, was an Italian sculptor, painter, architect, and poet. He is regarded as one of the most important artists of the High Renaissance. After his mother died when he was six years old, he moved in with a stonecutter's family in Florence. Michelangelo was never interested in schools and instead pursued a career as a painter, subsequently becoming an apprentice to a painter before studying in the Medici family's sculpture gardens. Following that, he began to concentrate on his profession, carving up a great career as an Italian Renaissance painter and sculpture. The sculptures of Pieta and David, which were famous for their aesthetic skill, were two of his most important early works that helped him rise to prominence. Following that, Pope Julius II commissioned him to create his tomb, a project he labored on for four decades. Meanwhile, he was commissioned to create the ceiling of Rome's Sistine Chapel after garnering widespread acclaim for his sculpted works, a project that fired his creativity and resulted to the creation of one of the most significant works in Western art history. His other notable accomplishments include the design of the Medici Chapel and the Laurentian Library, as well as the masterpiece painting "Last Judgment" on the altar wall of the Sistine Chapel. Michelangelo was the finest artist of his generation, and his name has come to represent the best of the Italian Renaissance.

He was the son of Francesca di Neri del Miniato di Siena and Leonardo di Buonarotto Simoni. His poetry was homoerotic in nature and was written to such possible lovers as Tommaso dei Cavalieri, Cecchino dei Bracci, Febo di Poggio, and Gherardo Perini.

Before the age of 30, he made two of his most famous sculptures, Pietà and David. The Last Judgment on the altar wall of the Sistine Chapel and the Genesis events on the ceiling of the Chapel are two of the most significant artworks in Western art.

He was one of the architects involved in the creation of St. Peter's Basilica, succeeding Antonio da Sangallo the Younger when he was 74.

He and Leonardo da Vinci were two of the most influential figures of the High Renaissance.

● Michelangelo was born on March 6, 1475 (age 89) in Caprese, Italy ● He is a celebrity painter ● His full name is Michelangelo di Lodovico Buonarroti Simoni● He died on February 18, 1564, Rome, Italy 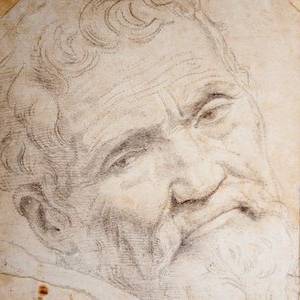